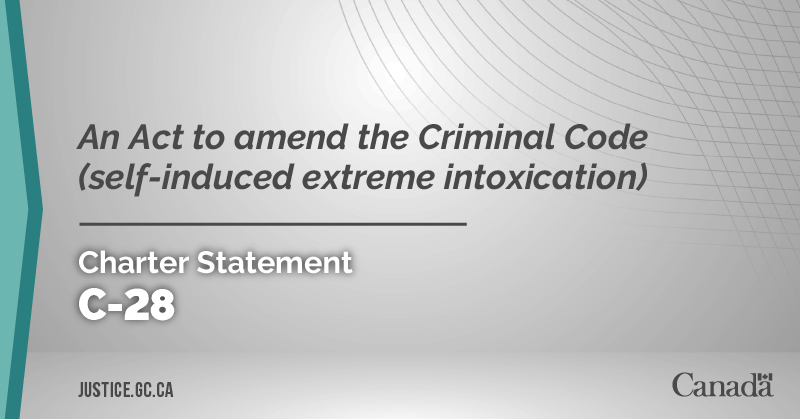 The Minister of Justice has examined Bill C-28, An Act to amend the Criminal Code (self-induced extreme intoxication), for any inconsistency with the Charter pursuant to his obligation under section 4.1 of the Department of Justice Act. This review involved consideration of the objectives and features of the Bill.

What follows is a non-exhaustive discussion of the ways in which Bill C-28 potentially engages the rights and freedoms guaranteed by the Charter. It is presented to assist in informing the public and Parliamentary debate on the Bill.

Bill C-28 would amend s. 33.1 of the Criminal Code to provide that persons who engage in violent acts while in a state of self-induced extreme intoxication can be found criminally responsible for such acts if they consumed intoxicants in a criminally negligent manner.

The Supreme Court of Canada Decision in Brown

The proposed amendments respond to the Supreme Court of Canada decision in R. v. Brown (2022) in which the Court found that the original version of s. 33.1, enacted in 1995, breached the rights of accused persons under s. 7 and s. 11(d) of the Charter in a manner not justified under s. 1 of the Charter. The Brown decision was released on the same day as the decision in R. v. Sullivan and Chan, which also concerned the application of s. 33.1.

In considering whether s. 33.1 was justified under s. 1, the Supreme Court found that the provision had the pressing and substantial objectives of protecting the victims of extremely intoxicated violence, with particular attention to women and children, and of holding offenders to account for voluntarily ingesting intoxicants where this creates a risk of violent crime. It also found that the provision was rationally connected to these objectives. However, the Supreme Court found that s. 33.1 was not minimally impairing of rights (in the sense that there were other, less rights-impairing means for achieving the objectives of the provision) and was not proportionate overall because it did not include a standard of criminal negligence. As a result, the provision was deemed unconstitutional.

Section 33.1, as amended, would provide that a person who, as the result of self-induced extreme intoxication, lacks the general intent or voluntariness normally required to commit a violent offence still can be found criminally responsible for that offence if the person is criminally negligent in consuming intoxicants. A person is criminally negligent in consuming intoxicants if they departed markedly from the standard of care expected of a reasonable person in this regard. A court determining whether a person departed markedly from the expected standard of care must consider the reasonable foreseeability of the risk that the consumption of the intoxicant could cause extreme intoxication leading to the harm of another person. As such, the amendments would integrate the act and fault of negligent extreme self-induced intoxication as elements of the violent offences subject to s. 33.1 for cases where a defence of extreme intoxication is raised. In this way, negligent extreme intoxication would require proof of fault and voluntariness for the offences subject to s. 33.1 and avoid substitution of these elements.

Extreme intoxication is a state akin to automatism in which a person is unaware of their behaviour or incapable of consciously controlling it. In assessing whether an accused was criminally negligent in their consumption of intoxicants, the court must also consider all relevant circumstances, including anything that the person did to avoid the risk. Section 33.1 applies to offences involving assault, including sexual assault, interference with the bodily integrity of another person, or the threat of such interference.

The following considerations support the consistency of s. 33.1, as amended, with the Charter. The amendments respond to the reasons given by the Supreme Court in Brown. The objective of the amendments is to seek to protect the public, particularly women and children, from extremely intoxicated violence. They also seek to hold individuals accountable for the violence they inflict on others where individuals depart markedly from the standard of care of a reasonable person in voluntarily ingesting intoxicants and there is a foreseeable risk of violent loss of control. The incorporation of a criminal negligence standard in s. 33.1 would ensure that any rights impairment in relation to the accused would be minimal and that any limit on rights would be proportionate overall to the objectives of the measure because criminal liability would be sufficiently connected to underlying criminal fault to justify conviction for the offences themselves.