Bill C-29: An Act to provide for the resumption and continuation of operations at the Port of Montreal 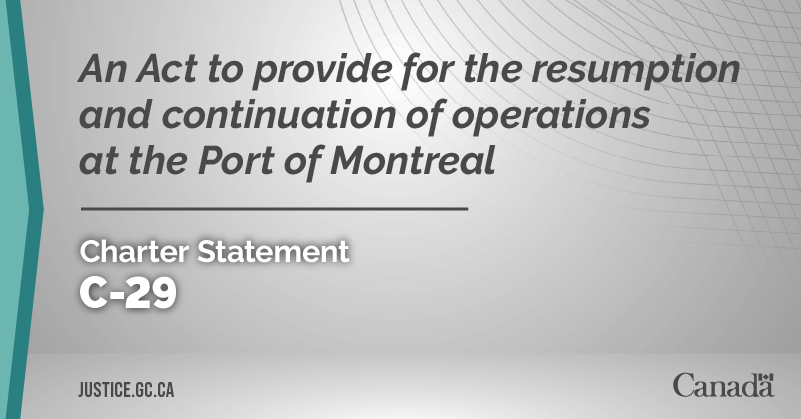 The Minister of Justice has examined Bill C-29, An Act to provide for the resumption and continuation of operations at the Port of Montreal, for any inconsistency with the Charter pursuant to his obligation under section 4.1 of the Department of Justice Act. This review involved consideration of the objectives and features of the Bill.

What follows is a non-exhaustive discussion of the ways in which Bill C-29 potentially engages the rights and freedoms guaranteed by the Charter. It is presented to assist in informing the public and Parliamentary debate on the Bill.

Bill C-29 potentially engages sections 2(b) and 2(d) of the Charter. Section 2(b) provides that everyone has freedom of thought, belief, opinion and expression and may encompass the act of withdrawing labour to express discontent over working conditions. Section 2(d) of the Charter provides that everyone has freedom of association and has been interpreted as preventing a “substantial interference” with the collective bargaining process. A meaningful collective bargaining process has been interpreted to include the ability of employees to strike in order to pursue a new collective agreement.

The following considerations support the consistency of Bill C-29 with the Charter. The resumption and continuation of Port operations are important to the Canadian economy as a whole. The Bill would prevent continuing and significant economic harms to Canadian businesses, their employees and those who depend on their services. These harms are exacerbated by the COVID-19 pandemic, which has disrupted global supply chains and made it difficult for Canadian businesses to receive and deliver their goods on time. Prominent companies have begun to divert cargo away from the Port as a result of the continued uncertainty and escalating work stoppages. The Port is the second largest container port in Canada, and it is a major link in the Canadian and U.S. supply chain of raw materials and various containerized products. It is also a key gateway for the import of containerized essential products (e.g., critical medical goods, pharma products, food, and critical inputs for the pharma and the food industries) for the Quebec and Ontario markets.

The Bill is introduced only following unsuccessful efforts to bring the collective bargaining process to a satisfactory conclusion. The parties have been collective bargaining since September 4, 2018. The Government has taken significant steps to promote the collective bargaining process by encouraging a negotiated resolution of the parties’ dispute. The Government has appointed many conciliators and mediators throughout a period of two and half years to assist the parties with their negotiation. During this period, neither party was permitted to initiate a work stoppage pending a decision from the Canada Industrial Relations Board (CIRB) to determine which activities needed to be maintained at the Port. Following the CIRB decision in June 2020, a number of work stoppages were initiated by the union, including a general 11-day unlimited strike that started on August 10, 2020. The parties entered into a truce period from August 21, 2020, to March 21, 2021. On April 13, 2021, the union initiated a partial strike, ceasing all overtime, weekend work and training. The partial strike had a significant impact, as it substantially reduced capacity at the Port. The union escalated the job action, commencing a full strike, on April 26, 2021. Since their dispute began, the parties have engaged in a significant number of mediated bargaining sessions, and the union has used its freedom to strike to pursue a new collective agreement, but the parties have so far been unable to conclude a new collective agreement.