Bill C-3: An Act to amend the Royal Canadian Mounted Police Act and the Canada Border Services Agency Act and to make consequential amendments to other Acts 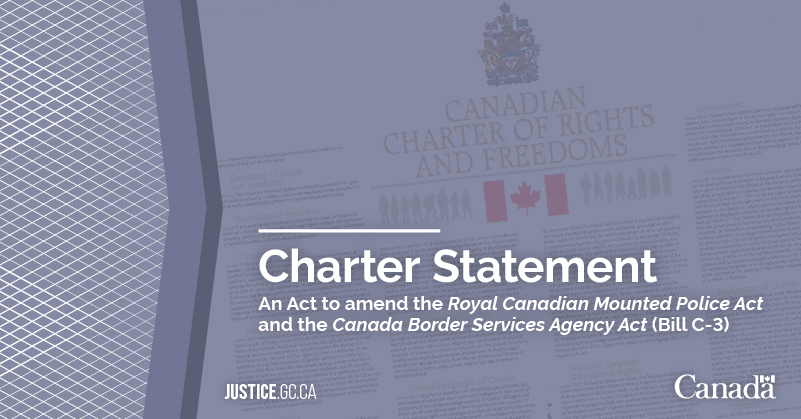 The Minister of Justice has examined Bill C-3, An Act to amend the Royal Canadian Mounted Police Act and the Canada Border Services Agency Act and to make consequential amendments to other Acts, for any inconsistency with the Charter pursuant to his obligation under section 4.1 of the Department of Justice Act. This review involved consideration of the objectives and features of the Bill.

What follows is a non-exhaustive discussion of the ways in which Bill C-XX potentially engages the rights and freedoms guaranteed by the Charter. It is presented to assist in informing the public and Parliamentary debate on the Bill.

Clauses 12-15 would amend the Canada Border Services Agency Act to provide the Commission with powers to review activities of the CBSA which are not related to national security and to investigate complaints concerning CBSA service or the conduct of any CBSA officers or employees, including complaints relating to the treatment of detained persons and conditions of detention. Combined with existing review mechanisms, the Commission would provide additional scrutiny of the CBSA’s activities and would create an effective accountability mechanism to safeguard human rights and secure compliance with the law.

To ensure that accountability mechanisms are also available for detained persons held on behalf of the CBSA in provincial facilities, Clause 14 would amend section 13 of the Canada Border Services Agency Act to specify that, subject to exceptional circumstances, the CBSA may only enter into detention agreements with provincial authorities where a province has an independent mechanism to address complaints about the treatment of detained persons and conditions of detention. Requiring an independent complaint mechanism for provincial detention agreements would also promote transparency and the safeguarding of human rights for all persons detained by or on behalf of the CBSA.

Sections 23 to 24, enacted by Clause 15 of the Bill, would provide the Commission with the power to access any information in the possession or under the control of the CBSA that the Commission considers relevant in relation to a review (section 18) or a complaint (sections 33 and 39), subject to certain exceptions. These exceptions are specified in section 26, enacted by Clause 15, which clarifies that the Commission is not entitled to have access to information that is a Cabinet confidence or commercial information that Canada has committed to keep confidential under an international agreement. Section 27 would generally prohibit the disclosure of information by Commission members and staff for purposes other than performing the powers, duties and functions of the Commission except where authorized or required by law. In addition, the disclosure of information by the Commission to third parties is subject to certain required safeguards (section 29).

Section 8 of the Charter protects against “unreasonable” searches and seizures. The purpose of section 8 is to protect persons against unreasonable intrusion into a reasonable expectation of privacy. A search or seizure that intrudes upon a reasonable expectation of privacy will be reasonable if it is authorized by a law, the law itself is reasonable (in the sense of striking an appropriate balance between privacy interests and the state interest being pursued), and it is carried out in a reasonable manner. Because the powers to access and use information have the potential to interfere with privacy interests they may engage section 8 of the Charter.

The following considerations support the consistency of the provisions with section 8 of the Charter. The purpose of the proposed provisions enable the Commission to obtain information in support of its mandate to provide a public accountability mechanism for the CBSA. The provisions are tailored to limit any potential interference with privacy interests to what is relevant and necessary for the Commission to carry out its review and complaints investigation functions. Information collected by the Commission may only be used for the purposes of a review or complaint and would not be used to further criminal investigations. Therefore, the proposed powers would strike an appropriate balance between privacy interests and the Commission’s obligations to review the activities of the CBSA and carry out investigations of complaints made with respect to the conduct of CBSA officers and employees.

Section 53, enacted by Clause 15 of Bill C-3, would amend the Canada Border Services Agency Act to set out the Commission’s powers to institute a public hearing regarding a complaint as well as a framework to facilitate the protection of sensitive information in the course of a public hearing.

Under subsection 53(6), the Commission could decide to hold all or part of a hearing inquiring into a complaint in the absence of the public, parties and their representatives if it is of the opinion that certain types of sensitive information will likely be disclosed. This power would protect the following types of sensitive information from disclosure in a public hearing: information that could be injurious to national security, national defence or international relations; information which could compromise or seriously hinder the administration or enforcement of program legislation or the investigation or prosecution of an offence; information regarding a person’s finances or personal affairs where that person’s interest or security outweighs the public interest in disclosure; information which could be subject to privilege or professional secrecy of advocates and notaries; as well as certain sensitive commercial information which Canada has committed to keeping confidential under an international agreement. Paragraph 53(6)(e) would also provide a discretion for the Commission to hold all or part of a hearing in the absence of the public and parties where it is of the opinion that the circumstances of the case otherwise require it.

Freedom of expression (section 2(b))

Section 2(b) of the Charter protects freedom of thought, belief, opinion and expression, including the open court principle. Under this principle, there is a presumption that court and tribunal proceedings are open to both the public and the media. Because subsection 53(6) would provide that the Commission’s hearings may be conducted in the absence of the public and parties in certain circumstances, the exercise of this proposed power may engage section 2(b) of the Charter.

The following considerations support the consistency of subsection 53(6) with the Charter. Like other Charter rights, the open court principle is not absolute and may be limited in furtherance of pressing state objectives. Protecting sensitive information, such as information subject to privilege or where the disclosure of that information could harm international relations, national defence, national security, or compromise criminal investigations and prosecutions, is a recognized and important state interest. Subsection 53(6) would only apply in the circumstances raising important state interests specified in the provision. The responsibility for assessing whether the release of the information in the course of a hearing could lead to the specified harms would lie with the Commission who must exercise their power to limit public access reasonably.

Powers of the Commission and Offences

Section 45, enacted by Clause 15 of the Bill, would provide the Commission with the power to summon and enforce the attendance of witnesses in the same manner as a superior court in relation to complaints which are before it, including the power to compel testimony and require the production of documents and other evidence relevant for the full investigation, hearing and consideration of a complaint.

Sections 67 to 69, enacted by Clause 15 of the Bill, would create several summary conviction offences related to the Commission’s activities and proceedings that may be punishable by a fine, imprisonment or both. Subsection 67(1) would set out offences related to proceedings before the Commission, including for the following: the failure of a person to attend in response to a summons issued by the Commission, the refusal of a witness to take an oath or solemn affirmation or to provide information as required, the use of insulting or threatening language at a proceeding, as well as dissuading witnesses from testifying. Subsection 68(1) would set out offences related to the obstruction of the Commission’s process, including offences for the harassment, intimidation or threatening of persons related to a complaint, those who may make a complaint, and persons carrying out duties and functions of the Commission. Subsection 68(1) also includes offences for wilfully obstructing persons carrying out duties and functions of the Commission, as well as for destroying, falsifying, concealing or tampering with documents and other materials that are likely to relevant to the investigation or hearing of a complaint by the Commission. Subsection 69(1) would create offences for violating the prohibition on the disclosure of information (section 27) and the obligation to comply with certain safeguards with respect to third party information (subsection 29(3)).

Section 7 of the Charter protects against the deprivation of an individual’s life, liberty and security of the person unless done in accordance with the principles of fundamental justice. The power to summon a witness to provide testimony may engage section 7 of the Charter by depriving individuals of their liberty and so must accord with the principles of fundamental justice. Because the offences proposed in sections 67 to 69 all carry the possibility of imprisonment, they also have the potential to deprive individuals of their liberty and must accord with the principles of fundamental justice. The following considerations support the consistency of the Commission’s power to summon witnesses to compel testimony and the related offences with the Charter. These provisions are necessary tools in order for the Commission to effectively investigate complaints from the public concerning CBSA service or the conduct of any CBSA officers or employees in fulfillment of its important accountability mandate. Testimony and evidence produced by a witness could not be used in further proceedings against the individual, with the exception of offences and proceedings regarding perjury. In reviewing the proposed offences, the Minister has not identified any potential inconsistencies between the principles of fundamental justice and the offences in the proposed Act.

Freedom of expression (section 2(b))

Section 2(b) of the Charter is based on important values, such as promotion of the search for truth and participation in social and political decision-making. Expression taking the form of violence or directed towards violence is not protected by the Charter. Freedom of expression may be engaged by the proposed offences in paragraphs 67(1)(c) and (d) of Clause 15 as they prohibit forms of communication.