Bill C-9: An Act to amend the Judges Act 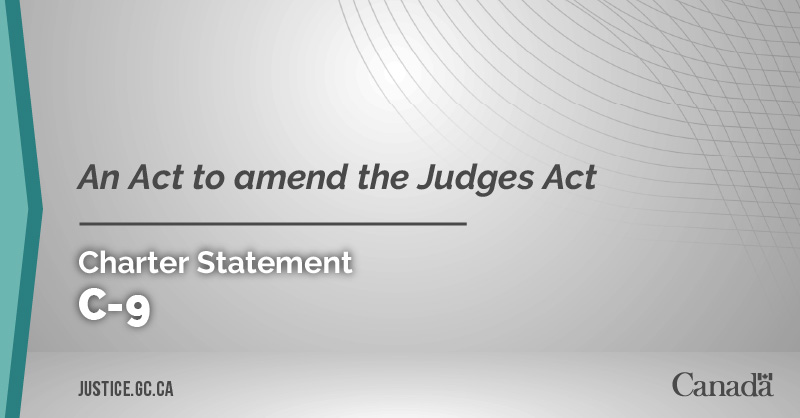 The Minister of Justice has examined Bill C-9, An Act to amend the Judges Act, for any inconsistency with the Charter pursuant to his obligation under section 4.1 of the Department of Justice Act. This review involved consideration of the objectives and features of the Bill.

What follows is a non-exhaustive discussion of the ways in which Bill C-9 potentially engages the rights and freedoms guaranteed by the Charter. It is presented to assist in informing the public and Parliamentary debate on the Bill.

Bill C-9 would introduce comprehensive reforms to the processes through which judicial conduct is reviewed and sanctioned. The proposed reforms to the Judges Act aim to enhance the Canadian Judicial Council’s capacity to effectively respond to all allegations of judicial misconduct against federally appointed judges, not just highly serious instances potentially warranting removal from office. The proposed measures seek to promote procedural fairness in an independent, effective, and efficient judicial conduct review process designed to minimize delays and contain costs. The Bill would also introduce new mechanisms to govern public funding of process costs, including judges’ legal fees, and adjust pension accrual rules for judges subject to removal from office.

Bill C-9 would change the processes through which judicial conduct is overseen. A number of procedural reforms would be introduced to include laypersons within the initial stages of the judicial conduct review process; formalize new procedural rules to guide updated review processes; and create new re-hearing and statutory appeal rights for judges. Review panels with a diversity of expertise would be empowered to impose a range of sanctions for judicial misconduct not warranting removal from office. New powers would include the power to order a public or private apology and other specified measures, including a course of counselling or continuing education. Judges could request a re-hearing by a fresh review panel made up of different decision-makers. Where judicial conduct could be serious enough to potentially warrant removal from office, a larger public hearing panel would assess the matter and issue a report to the Minister of Justice. A new right to appeal a public hearing panel’s decision would be created. This right could be exercised before appeal panels composed of five judges. An appeal panel’s decision could be appealed to the Supreme Court of Canada with leave of the Court. In addition, new mechanisms to govern the allocation of public funding for the judicial conduct process would be introduced.

The right to an independent and impartial tribunal (section 11(d))

Section 11(d) of the Charter provides that individuals charged with an offence have the right to a hearing before an independent and impartial tribunal. This is part of the unwritten constitutional principle of judicial independence. The right to an independent and impartial tribunal requires that courts be free to make decisions without interference, including interference from the executive and legislative branches of government. Security of tenure, one of the essential components of judicial independence, guarantees a judge facing removal from office a right to a hearing at which the judge has an opportunity to be heard and to test and adduce evidence. By proposing changes to the review and sanctioning of judicial misconduct and new mechanisms for the allocation of public funding, the proposed amendments to the Judges Act have the potential to engage rights related to security of tenure under section 11(d).

The following considerations support the consistency of the proposed changes to judicial conduct proceedings with section 11(d) of the Charter. An appropriate regime for the review of judicial conduct is essential to maintaining public confidence in the judiciary, a key prerequisite for judicial independence. The Bill would change only procedural aspects of the review process. The new processes would continue to permit judges a full opportunity to be heard in a fair and impartial decision-making process led independently by members of the judiciary. There are a number of procedural fairness guarantees proposed, including the Canadian Judicial Council’s discretion over preliminary complaint screening, and multiple opportunities for re-hearings and appeals to allow judges a full opportunity to present their positions before an independent review panel. For any matters so serious that removal from office may be warranted, the new procedures would support fully informed decision-making on the basis of a complete record that is not tainted by any unresolved allegations of procedural unfairness.

With respect to proposed changes impacting process funding, judges’ access to funding will be determined by new guidelines that must be issued by the Commissioner for Federal Judicial Affairs, who operates at arms-length from the government. The Commissioner may adopt Treasury Board guidelines or directives and must publicly explain any differences between funding available to others under Treasury Board guidelines or directives and funding made available to judges under its own guidelines. This will ensure that process funding is reasonable and consistent with fair, objective and widely applicable public standards. The Judges Act would also expressly provide for the reimbursement of the fees of lawyers representing judges that are the subject of a complaint at all steps in the reformed process, subject to any overriding regulations or guidelines. The Commissioner for Federal Judicial Affairs will independently allocate funding in accordance with these publicly available standards. A periodic and independent review process will be established to oversee process cost payments, serving as another important safeguard.

Freedom of Expression (section 2(b) of the Charter)

Section 2(b) of the Charter protects freedom of thought, belief, opinion, and expression, including the open courts principle. Under this principle, there is a presumption that court and tribunal proceedings are open to both the public and the media. The proposed changes to judicial conduct proceedings may engage the open courts principle under section 2(b) because of the possibility of private hearings and publication bans. In addition, certain potential sanctions, like an order that a judge give a public or private apology, may implicate judges’ freedom of expression.

The following considerations support the consistency of proposed reforms to the judicial conduct oversight process with section 2(b) of the Charter. All hearing panel proceedings – reduced, full, and appeal – would be public by default. The hearing panel would retain discretion to hold a private hearing or issue a publication ban where it determined this would be in the public interest. The Canadian Judicial Council will publish hearing panel reports in a manner consistent with the public nature of the proceedings. Panels’ discretion over private hearings and when a publication ban may be warranted, which must be exercised in accordance with the Charter, permits a proper balance to be struck between openness and any competing considerations on a case-by-case basis. Panels’ discretionary authority to order a judge to issue a public or private apology must also be exercised in accordance with the Charter. This will require review panels to give appropriate weight to both the statutory objectives of the Judges Act and judges’ freedom of expression in the individual context of each case.

The right to an independent and impartial tribunal (section 11(d))

In addition to protecting security of tenure, the right to an independent and impartial tribunal also requires that judges be free to make decisions without interference with their financial security. Measures that would suspend the counting of a judge’s years in office for the purposes of calculating their entitlement to a pension have the potential to engage section 11(d). This is because these proposals may affect the availability of financial benefits for judges when they retire or are removed from office.

The following considerations support the consistency of the changes to pension accrual rules with the principle of judicial independence as it is protected by section 11(d) of the Charter. The proposed amendments are based on recommendations made by the Judicial Compensation and Benefits Commission. The Judicial Compensation and Benefits Commission is an independent and objective body that reviews all matters potentially impacting the compensation and benefits of federally appointed judges in order to help protect judges against interference with their financial security. Judges whose pension calculation is suspended would continue to receive salary increases and would not be required to contribute towards their pension during this period. If the recommendation to remove a judge is rejected, the counting of a judge’s years in office would resume as if it had never been interrupted. The amendments would thus preserve the financial security of judges and the independence of the judiciary.