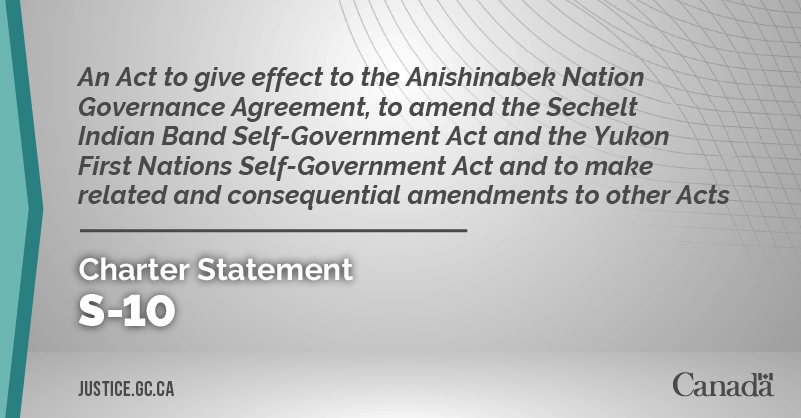 The Minister of Justice has examined Bill S-10, An Act to give effect to the Anishinabek Nation Governance Agreement, to amend the Sechelt Indian Band Self-Government Act and the Yukon First Nations Self-Government Act and to make related and consequential amendments to other Acts, for any inconsistency with the Charter. This review involved consideration of the objectives and features of the Bill.

What follows is a non-exhaustive discussion of the ways in which Bill S-10 potentially engages the rights and freedoms guaranteed by the Charter. It is presented to assist in informing the public and Parliamentary debate on the Bill. It does not include an exhaustive description of the entire bill, but rather focuses on those elements relevant for the purposes of a Charter statement.

Part 2 of this Bill would amend the Sechelt Indian Band Self-Government Act to take into account changes to the name of the Indigenous collective (shíshálh Nation) and to include certain elements typically provided for in self-government agreements, including with respect to the shíshálh Nation’s constitution and laws and the application of the Canadian Charter of Rights and Freedoms.

Part 3 of this the Bill would amend the Yukon First Nations Self-Government Act so that funding agreements no longer require Governor in Council approval.

Section 15(1) of the Charter protects equality rights. It provides that every individual is equal before and under the law and has the right to the equal protection and equal benefit of the law without discrimination, including on the basis of age. Equality entails the promotion of a society in which all are secure in the knowledge that they are recognized at law as equally deserving of concern, respect, and consideration.

In giving effect to the Anishinabek Nation Governance Agreement, the Bill would restrict eligibility for voting on ratification of the Agreement to persons who are at least 18 years old. This restriction could potentially engage section 15, as it creates a distinction based on age.

The following considerations support the consistency of this restriction with section 15. Limiting eligibility to vote on the ratification of the Agreement to those who are at least 18 years of age reasonably corresponds to a level of maturity to make rational and informed decisions about representative government. Since individuals mature differently, any reasonable age-based restriction will exclude some individuals who could cast a rational and informed vote and include some individuals who cannot.

The restriction on the age of eligibility to vote on the ratification of the Agreement was co-developed and agreed upon by the parties to the Agreement (Canada, the First Nations and the Anishinabek Nation). The Anishinabek Nation relied on their research and community customs in adopting the age of 18 as the age of voting eligibility. Based on this research, they are of the view that no band member was disenfranchised from voting who might otherwise be permitted to vote in a community decision-making process.