Bill S-4: An Act to amend the Criminal Code and the Identification of Criminals Act and to make related amendments to other Acts (COVID-19 response and other measures) 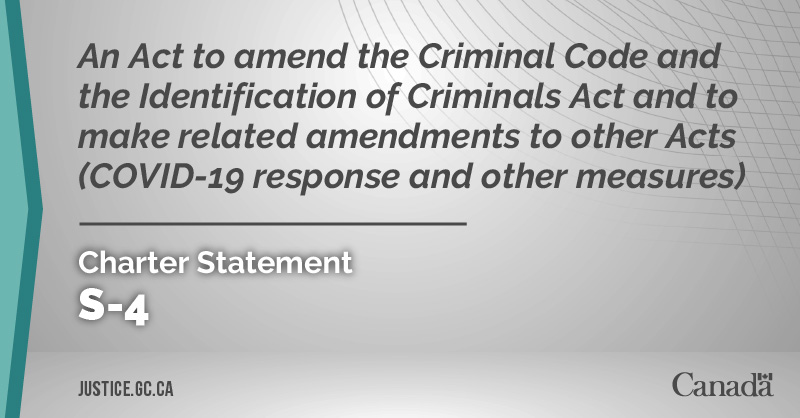 The Minister of Justice has examined Bill S-4, An Act to amend the Criminal Code and the Identification of Criminals Act and to make related amendments to other Acts (COVID-19 response and other measures), for any inconsistency with the Charter pursuant to his obligation under section 4.1 of the Department of Justice Act. This review involved consideration of the objectives and features of the Bill.

What follows is a non-exhaustive discussion of the ways in which Bill S-4 potentially engages the rights and freedoms guaranteed by the Charter. It is presented to assist in informing the public and Parliamentary debate on the Bill.

Bill S-4 would introduce a number of criminal procedure reforms. The proposed changes are intended to address the impacts of the COVID-19 pandemic on criminal courts while increasing the flexibility and efficiency of the criminal justice system. Among the changes are amendments to the Criminal Code that would enhance and clarify rules for remote criminal proceedings, including appearances by videoconference or audioconference, and that would expand the current telewarrant process to allow state representatives such as police or specific public officers to apply remotely for judicial authorizations in a wider range of circumstances. Other changes include amendments to the Criminal Code and the Identification of Criminals Act to allow fingerprinting to occur at a later time than is currently permitted to deal with circumstances such as those caused by COVID-19.

Remote appearances in criminal proceedings are available through existing measures in the Criminal Code. A remote appearance is when a person appears before a judge without being physically present in the courtroom, such as by teleconference or videoconference. In order to respond to the needs of the criminal justice system as highlighted by the pandemic, these measures would be expanded and clarified. For example, the reforms would clarify the law by providing an explicit legislative mechanism to permit accused persons to appear at preliminary inquiries and at indictable and summary conviction trials by videoconference for the entirety of the trial, except where evidence is being taken before a jury. The reforms would also clarify that an accused person can enter a plea or appear at a sentencing hearing by a video or audio appearance. The ability to appear by audio would be clarified to apply only where videoconferencing is not readily available. Before an accused person or offender would be able to appear by videoconference or audioconference, a judge must be of the opinion that appearances by these means would be appropriate in the circumstances, including in consideration of the right of the accused person or offender to a fair and public hearing. Courts also would have to ensure that accused persons who do not have access to legal advice during the remote proceedings are able to understand the proceedings and that accused who are represented by counsel can consult privately with their counsel. In addition, the reforms would give courts discretion to allow prospective jurors to participate in the jury selection process by videoconference under certain circumstances.

Section 7 of the Charter guarantees the right to life, liberty and security of the person, and the right not to be deprived thereof except in accordance with the principles of fundamental justice. Section 11(d) of the Charter guarantees the right to be presumed innocent until proven guilty according to law in a fair and public hearing by an independent and impartial tribunal. Both sections 7 and 11(d) protect the right of an accused person to make full answer and defence in a fair and public hearing. Section 2(b) of the Charter protects freedom of thought, belief, opinion and expression; it includes the open court principle under which there is a presumption that court proceedings are open to both the public and the media. The measures on remote proceedings may engage sections 2(b), 7 and 11(d) of the Charter. The following considerations support the consistency of the remote appearance provisions with sections 2(b), 7 and 11(d).

The provisions on remote proceedings would be subject to judicial approval and supervision. This judicial control over the powers includes ensuring that they are exercised in accordance with the Charter, including the right of an accused person to make full answer and defence and to have a fair and public hearing. The judicial powers are set out with numerous requirements and conditions. With few exceptions, the ability to allow for remote proceedings would be subject to the consent of accused persons.

Section 8 of the Charter protects against unreasonable searches and seizures. The purpose of section 8 is to protect individuals from an unreasonable intrusion into a reasonable expectation of privacy by the state. A search or seizure will be reasonable if it is authorized by law, the law itself is reasonable (in the sense of striking an appropriate balance between privacy interests and the state interest being advanced), and the search is carried out in a reasonable manner. The proposed telewarrant provisions may engage section 8 of the Charter. The following considerations support the consistency of the telewarrant amendments with section 8.

Fingerprinting at a Later Time

Currently, a person charged with an offence can be required to attend for fingerprinting as specified in an appearance notice or undertaking issued by a police officer, or in a summons issued by a justice when criminal charges are confirmed. In addition, if they are detained, a person can be required to have their fingerprints taken before they are initially brought before a justice. The circumstances produced by the pandemic have illustrated a need to expand the times at which fingerprints can be taken. This is because the current rules on timing can cause undue health risks for accused persons or state representatives, or alternatively cause a loss of the ability to obtain fingerprints. The reforms would give a justice or judge the discretion to issue a summons for an accused person or offender to appear for fingerprinting if: (a) the person was previously required to appear for fingerprinting and the procedures could not be completed; and, (b) the justice or judge is satisfied that the reasons for them not having been completed were exceptional. Courts would also have the ability to make an order for the fingerprinting of an accused person who is being released on bail.

Jurisprudence suggests that any potential engagement of Charter rights by procedures such as fingerprinting that are used for the identification of persons charged with or convicted of offences is limited in nature. The additional fingerprinting procedures that would be allowed by the reforms would provide for judicial discretion to allow fingerprinting at a later stage, subject to procedural requirements and limits. To the extent that Charter implications would arise, this judicial discretion would have to be exercised in a Charter-compliant fashion.