Bill S-5: An Act to amend the Canadian Environmental Protection Act, 1999, to make related amendments to the Food and Drugs Act and to repeal the Perfluorooctane Sulfonate Virtual Elimination Act 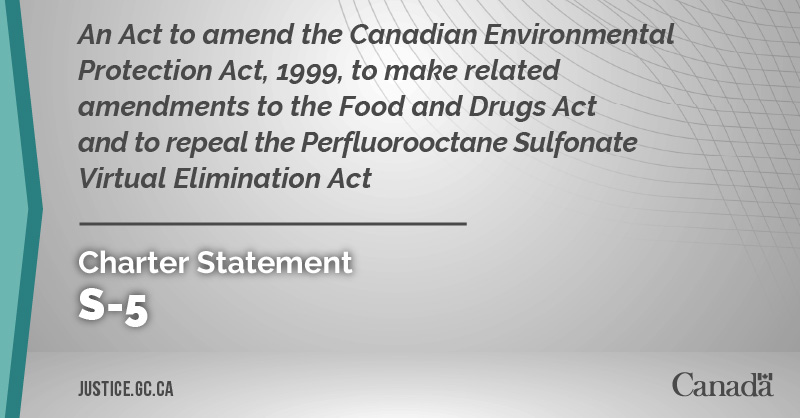 The Minister of Justice has examined Bill S-5, An Act to amend the Canadian Environmental Protection Act, 1999, to make related amendments to the Food and Drugs Act and to repeal the Perfluorooctane Sulfonate Virtual Elimination Act, for any inconsistency with the Charter pursuant to his obligation under section 4.1 of the Department of Justice Act. This review involved consideration of the objectives and features of the Bill.

What follows is a non-exhaustive discussion of the ways in which Bill S-5 potentially engages the rights and freedoms guaranteed by the Charter. It is presented to assist in informing the public and Parliamentary debate on the Bill.

Bill S-5, the Act to amend the Canadian Environmental Protection Act, 1999, to make related amendments to the Food and Drugs Act and to repeal the Perfluorooctane Sulfonate Virtual Elimination Act, seeks to strengthen chemicals management in Canada through modernization of the Canadian Environmental Protection Act, 1999 and Canada’s Chemicals Management Plan. The bill specifies that in the administration of the Canadian Environmental Protection Act, the Government of Canada shall protect the right to a healthy environment, as provided for in the Act, and requires the development of an implementation framework that sets out how that right will be considered in the administration of the Act. It would also amend the Food and Drugs Act to allow for the creation of an environmental notification, risk assessment and risk management regime for drugs.

Search and Seizure (section 8 of the Charter)

Section 8 of the Charter protects against unreasonable searches and seizures. The purpose of section 8 is to protect individuals from an unreasonable intrusion into a reasonable expectation of privacy by the state. A search or seizure will be reasonable if it is authorized by law, the law itself is reasonable (in the sense of striking an appropriate balance between privacy interests and the state interest being advanced), and the search is carried out in a reasonable manner.

The scope and administration of information-gathering powers under the Canadian Environmental Protection Act, 1999

Measures to broaden information-gathering authorities under the Canadian Environmental Protection Act, 1999 and support their effective administration could potentially engage section 8. These measures include provisions at Clause 9 that would match the Minister’s information-gathering authorities to a modernized approach. This new approach would cover a broader range of substances and products, including products that may release substances into the environment, and prioritize the assessments of such substances. Other amendments at Clause 50 would support the integrity of confidentiality protections for sensitive business information, such as requiring a request for confidentiality to be accompanied by supporting reasons. Additional changes proposed at Clause 53 would give the Minister discretion to disclose certain information subject to a request for confidentiality in particular circumstances. This could occur, for example, when a significant period of time had elapsed since the submission of the information. By way of Clause 52, the Bill would also extend the Minister’s existing authority to share information under information-sharing agreements and arrangements. Federal boards or agencies would be newly included among the list of eligible recipients of such information.

The following considerations support the consistency of these measures with section 8. The new information to be gathered relates to substances and activities regulated in the public interest and is a minimal extension of existing authorities under the Act. This information will assist in the evidence-based administration of an important regulatory regime. It will be collected for the purpose of ensuring compliance with statutory requirements arising in a highly regulated context, which is a context where there are reduced privacy interests. Confidential business information would continue to benefit from protections. These protections include a mechanism for persons who provide information under the Act to request that the information be treated as confidential and to be consulted on disclosure decisions. When making decisions on whether to disclose information, the Minister will have discretion to balance the protection of confidential information with the public interest in transparency and the regulatory objectives of the Act.

Freedom of Expression (section 2(b) of the Charter)

Commercial expression under the Food and Drugs Act

Clause 65 proposes to add a new section 21.302 to the Food and Drugs Act. This would allow the Minister, if necessary in order to prevent a serious risk to the environment, to order the holder of a therapeutic product authorization to modify a product’s label or to modify or replace its package. These powers have the potential to limit freedom of expression under s. 2(b) of the Charter.

The following considerations support the justifiability of any limits on freedom of expression imposed under this section. The power is only available where the Minister believes that its exercise is necessary to prevent a serious risk to the environment, and so any restriction on freedom of expression must be tied to the important statutory objective. Further, the Minister, in exercising his or her discretion, is obligated to balance any limits on Charter rights against the statutory objectives.

Life, liberty and security of the person (section 7)

Section 7 of the Charter guarantees to everyone the right to life, liberty and security of the person, and the right not to be deprived thereof except in accordance with the principles of fundamental justice.

New and modified offences under the Canadian Environmental Protection Act, 1999

Section 7 of the Charter could be engaged as the existing enforcement provisions of the Canadian Environmental Protection Act will apply to a wider range of activities and persons. Targeted new offences punishable by way of imprisonment would be added and minor modifications would be made to certain existing offences. New offences would relate to the contravention of a permission granted under certain regulations under the Act, as provided for at Clauses 33 and 46, or the failure to provide certain notices now required under the Act, as specified at Clauses 27 and 44. Other measures in the Bill would modify certain provisions the contravention of which is already punishable by way of imprisonment. For example, it is currently an offence to fail to comply with a direction to take remedial measures in respect of a substance or a product containing a substance issued under Part 5 of the Canadian Environmental Protection Act. The proposal at Clause 37 to broaden the Minster’s powers to issue remedial directions so that this power also covers products that may release a substance into the environment would alter the scope of the related offence accordingly. As a result, certain activities in relation to such products will now become subject to the offence and sentencing provisions of the Act.

The following considerations support the consistency of the foregoing measures with section 7. New offences punishable by way of imprisonment relate to expanded notification requirements under the Act or specific legal obligations imposed by way of regulations. These offences would capture conduct that would undermine the government’s important regulatory objectives and potentially put the public at risk. They would ensure non-compliance with new obligations added to the Act is enforceable in the same way as existing requirements. The potential punishments range in severity and would be appropriately tailored in the course of sentencing to fit the circumstances of each case. In cases where provisions setting out obligations that already form the foundation of offences are being modified, the proposed modifications would make only minor terminological changes or incrementally expand the scope of existing obligations in a way that is aligned with the Act’s modernized approach to the regulation of toxic substances. In reviewing these provisions, the Minister has not identified any potential inconsistencies with the principles of fundamental justice.

New Offence under the Food and Drugs Act

In Clause 64, the Bill proposes to add a new section 11.1 of the Food and Drugs Act, which would prohibit the sale, manufacture, preparation, preservation, packaging or storing, for sale, of any drug that contains a prescribed substance, unless the Minister has carried out an assessment, in accordance with the regulations, of the substance’s risk to the environment. This proposal is similar in its overall effect to the process regarding new substances set out in s. 81 of the Canadian Environmental Protection Act, 1999 and associated regulations. Contravention of this prohibition would be punishable as an offence under sections 31 and 31.2 of the Food and Drugs Act. Since both of these offences carry the possibility of imprisonment, this proposal has the potential to deprive an individual of their liberty. As a consequence, it must accord with the principles of fundamental justice.

The following considerations support the consistency of the proposed prohibition with s. 7. The policy objective of the scheme is to take a precautionary approach to substances contained in drugs with respect to environmental risk. Reflecting this objective, proposed new subsection 30(1.01) would require the Minister to take into account the level of uncertainty respecting the risks to the environment associated with the use of a substance before recommending that it be prescribed for the purposes of the prohibition. The proposed prohibition is in all instances rationally connected to the statutory objective, as it ensures that any prescribed substance contained in a drug is subject to an assessment regarding risks to the environment. Further, there are no minimum penalties; sections 31 and 31.2 of the Food and Drugs Act leave sentencing judges with the discretion to fashion an appropriate and just sentence in any given case.